The action-adventure crime film is dubbed Korea’s “Fast & Furious” because it centers on a group of car enthusiasts who find themselves in the middle of a dangerous mission.

According to Flix Patrol, a streaming data aggregation platform, the Yoo Ah In-directed film scored ninth place in the world’s top 10 movies on Netflix, four days after its release.

Why is “Seoul Vibe” worth watching? 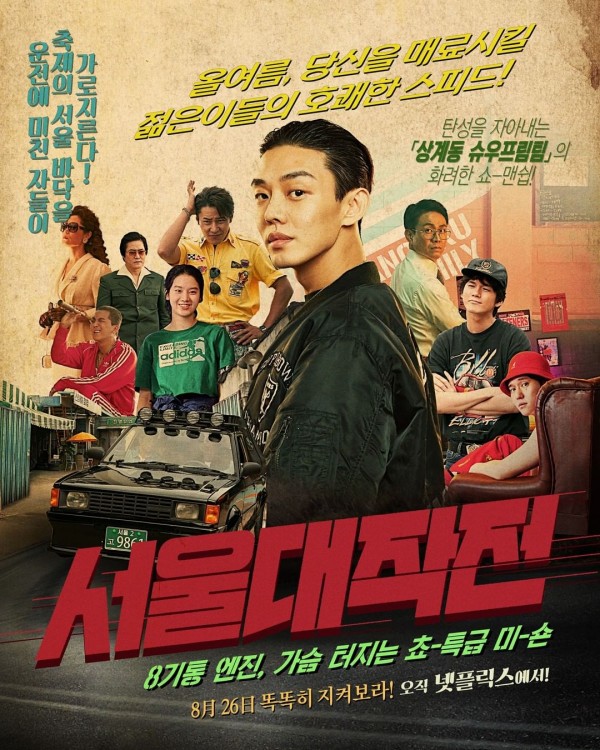 After a successful activity in Saudi Arabia, he and his friend Joon Gi (Ong Seong Wu) returned to South Korea.

However, they were blindsided by a deal from prosecutor Ahn (Oh Jung Se) to eliminate all of their cases in their home country in exchange for their participation in his investigation.

Hoping for a fresh start, Dong Wook and his team embark on a dangerous mission.

The group will infiltrate and obtain information about the slush fund activities of President Kang (Moon So Ri) and her right-hand man, Manager Lee (Kim Sung Kyun.)

On the first day of one of Korea’s notable events, the 1988 Seoul Olympics, the Sangedong Supreme Team lays out their plan to return to President Kang.

Apart from the jaw-dropping scene, the film also featured some nostalgic OSTs, including “CITY+++ (feat. Gaeko)” by Mino, who also appeared in the film.

At the “Seoul Vibe” press conference, director Moon Hyun Sung explained why he chose the 1988 Seoul Olympics as the backdrop for the film.

As obtained by a news outlet, he explained that it was one of South Korea’s most notable eras “when the light and dark sides both existed. I wanted to create a story set in that interesting time. “

On the other hand, Yoo Ah In talked about her transformation into the best wanderer Dong Wook.

He said he loved playing Dong Wook’s vibrant energy and at one point was “obsessed with his looks,” adding that he was “completely different from me in real life.”

As seen in the film, the character dons the style of the 80s where hip-hop meets fashion.